Crater Lake was created by the massive eruption of Mount Mazama about 7,500 years ago. In the volcanic blast, lava flowed 40 miles and the ash traveled across 656,000 square miles. The 12,000-foot mountain in Oregon’s Cascade Range shortened by a mile in two days, collapsing under the weight of the melted rock that was left behind.

I chose September for my visit to Crater Lake National Park because the weather is consistently warm and clear. Except when it isn’t. I happened to arrive in the wettest September in Oregon’s recorded history, which meant there was snow at Crater Lake with its highest elevation at 8,929 feet. The access roads were closed. For several days at my friends Liz and Jason’s home in Bend, I checked the park’s webcams. Over and over the view was solid gray and the closure continued.

My days off for vacation time were ticking away while Liz and I waited for the weather to clear so we could join Jason, a ranger who was already in the park. On September 30, the park re-opened. By then Liz had work in Bend the next day, so I drove up through the rain on my own.

The average temperature at Crater Lake in September is 64 degrees. It was 37 degrees as I walked through the snow to the rim overlook at 7,100 feet, hoping the cloud cover would lift enough for me to see the legendary view of the lake and Wizard Island 1,000 feet below. I had a momentary glimpse before the clouds closed in again and hoped for better luck the next day.

The following morning, October 1, I faced a different challenge, best illustrated in the following photo. 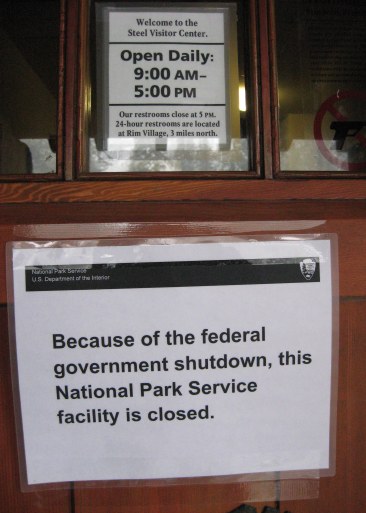 National Park Service staff graciously gave visitors a few hours to leave the park so I had time to walk for a few miles before I was booted out. The high-elevation trails were covered in snow and impassable. Rim Drive, closed to cars due to snow for days, offered the perfect place for a walk. I cleared the snow off the windshield, drove up to the parking lot at the end of the access road, and walked to the overlook. The sun was out. Here was the spectacular view of Crater Lake and Wizard Island that I had waited for.

When I left balmy California two weeks earlier, I tossed my cold-weather layers in the car just in case. Today I needed all of them. It was 29 degrees.

I brought my trekking poles so I could walk on the Discovery Trail adjacent to the road. Because I had left the poles in the car the night before, the handles were chilling my fingers even through my gloves. So I strapped them to my pack and ditched the plan to take the wet trail, since a fall from the rim into the crater could be my last. The walk and views on the empty road were lovely enough.

Outcrop with Wizard Island in the background

It had been a long time since I had heard the crunch of snow under my boots. There were no other footprints. With the weather and the federal government shutdown, I had a national park essentially to myself. The snow and ice on rock faces created stunning formations. 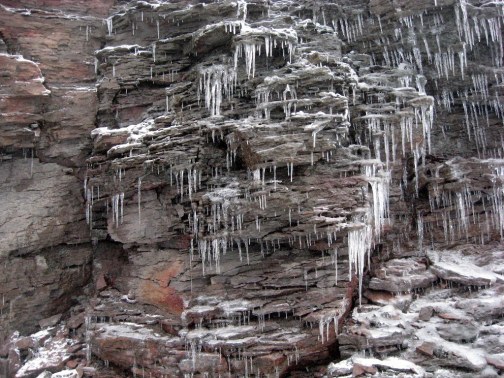 The view from the road

A closer look at colors and textures

The snow in the Cascade Range is so wet and heavy that it’s gotten the nickname of Cascade concrete. At Crater Lake, the average snowfall is 44 feet a year. The western hemlocks and Shasta red firs are well-adapted, shorter here than their counterparts at lower elevations.

Even the dead trees looked beautiful in the deep freeze, like they were wearing jewelry.

Ice crystals on a dead limb

A closer view of the ice crystals

The clouds rolled back in. At first there were just a few flurries, but soon the wind picked up and the snow fell in large flakes. It was time to turn around. I took a last photo of the trees in the storm before it got too wet for my camera. 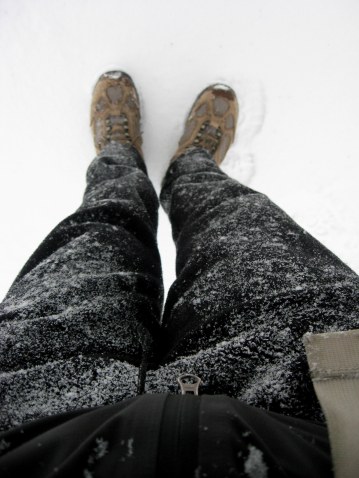 The fleece pants came in handy