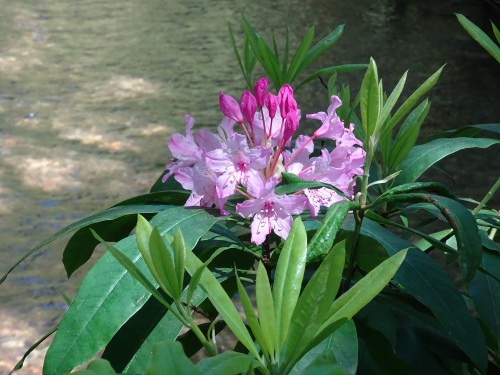 I set off into the darkness, toward the sound of the creek. Though I hadn’t been here in a long time, there was a familiar feel to a trail in a redwood forest. My feet knew the surface below me, and I smiled to myself hearing the sound of my footsteps on the wooden footbridge as Godwood Creek, shallow but swift, moved below me.

I might have hesitated on a dark night, but tonight with the moon above nearly full it was bright enough to read an interpretive sign on the reflective metal: New Growth.

I had come to Prairie Creek Redwoods multiple times, but never in the spring. Even in the darkness, I could see small white flowers adjacent to the trail. At an opening, I watched for bats and saw a few.

New growth. I couldn’t recall so much water here before, audible from a good distance away at Elk Prairie adjacent to the visitor center.

I knew this was a well-groomed, flat trail without obstacles or anything to trip on, but I placed each foot carefully. Not because I was afraid I would stumble, but because each footstep connected me with this forest of ancient redwoods.

There is something ironic about writing about an inherently wordless experience. It was about natural silence. Eventually, I tore myself away from the darkness and the creek to head back to my campsite. But I laid myself down on the same soft earth, to the soothing sound of the smaller Prairie Creek before it flowed into the bigger one.

More delights awaited me when I visited the trail in daylight. I had walked right past a large cluster of rhododendron blooms adjacent to the bridge, now just beyond where I could reach with my fingertips, and snapped the picture above. The new growth referenced in the sign was the vibrant green and delicate leaves of vine maple. The small white flower I’d seen was one of many, the blooms of redwood sorrel. This was the beginning of days meandering among the giants above me and tiny beauties below me.

What a treat to visit in the spring after a near-record wet winter. I had never been there when so much was blooming. 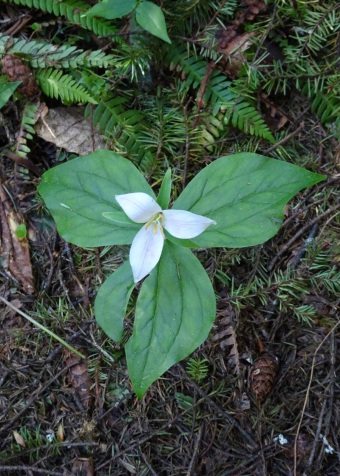 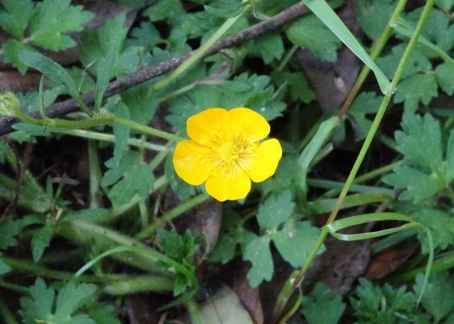 I meandered through Prairie Creek Redwoods State Park and neighboring parks, Redwood National Park and Jedediah Smith State Park, collectively managed together to best protect them. Trail damage was extensive from the winter storms with some trails still closed. For the ones that were open, they still had a lot of downed trees and limbs to climb over, under, or through.

Since May was still a bit rainy before the tourist season, I had little human company. The Ten Taypo Trail in Prairie Creek in some places was a carpet of moss from little use. 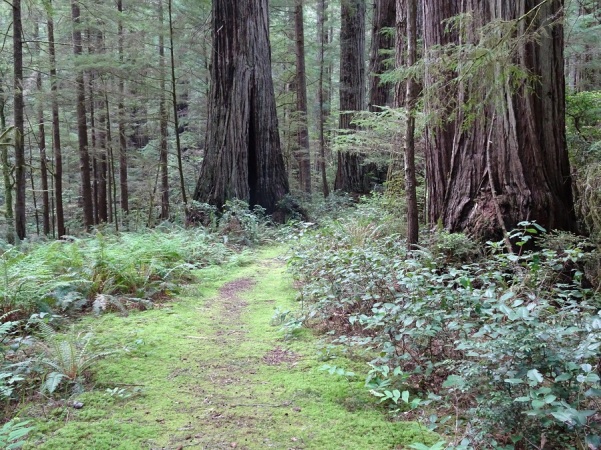 I was fortunate to observe lots of wildlife. Previously I had seen Roosevelt elk in the fall breeding season, when the bulls have their enormous antlers and aggressively vie for the cows. This time of year, instead the males herded together and the cows stayed as a separate group with juveniles. The young bulls had their new antlers for the season covered in velvet, and many of the elk had a patchwork of hair as they were shedding their winter coats. I watched them from a safe distance.

However, just because I gave them space didn’t mean they did the same. One day, I pulled my car over on the shoulder of the road to watch a herd, and they calmly strolled by just a couple feet away. I took the following photo through the open window.

It was nesting season for birds. This barn swallow glared at me when I got too close to his nest under the eaves of the bathroom at the Trillium Falls trailhead.

Everything was so lush, a tangle of green upon green, with every available spot occupied by something growing, including the dead logs that provided a home for everything from moss to whole trees that sprouted out of them. 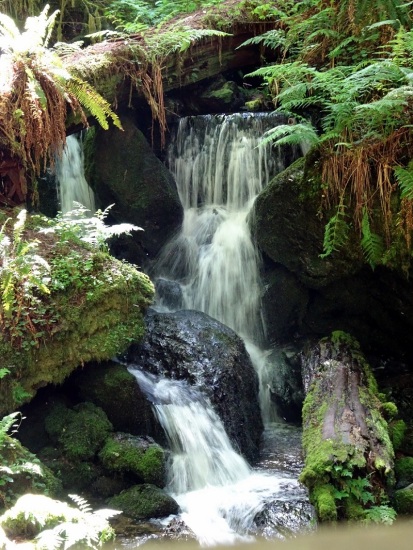 Even the picnic table at my campsite had a couple tiny plants sprouting where rainwater had soaked them. I transplanted them where they wouldn’t get trampled, and gave them a drink from my water bottle before I reluctantly headed home.