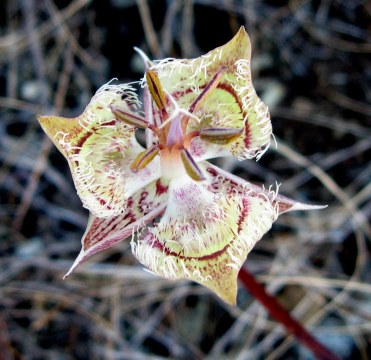 For years I’d heard about the threatened and protected Tiburon mariposa lily. A small population of individuals blooms for a few weeks on a single serpentine outcrop at Ring Mountain Open Space Preserve, and nowhere else in the world.

I at last decided to find the lily, researching its location online. I stumbled around on the crisscross of unmarked trails and found the general vicinity where the plant grows. I headed out alone, late in the day when the shadows were long and the trails were empty. I ended up on various side trails, poking around along the rocks. To protect them, there is no signage marking the exact spots where the lily grows. I had memorized the photos I’d seen, but realized since it’s not a showy flower and only the size of a quarter, I could easily miss it.

And there it was, right beside the trail. A single flower.

It was deeply moving to sit beside one of the world’s rare living things. I reached to touch it as I do with most plants, but extra gently. In the silence I appreciated that it exists, and felt grateful to those who arranged for The Nature Conservancy to purchase and protect this property until it could become public land.

That first visit to Ring Mountain was six years ago. I still visit each June to see the flowers, as I did a few days ago. This season after years of drought, the plants could barely eke out their blossoms, noticeably smaller and paler than I’ve ever seen them.

There is a depth of connection that comes with returning to familiar places over time. I have come to know which trails to hike at which time so that I can visit particular flowers I’m fond of.

This year, I’ve missed nearly the entire wildflower season while I’m recovering from the sprain that accompanied my broken ankle in January. Except for the Tiburon mariposa lily, a late bloomer that grows not far from the trailhead, I’ve had to be satisfied with memories and photos from previous trips. I’m smiling, though, looking at these images and thinking about next year.