When I read the news about the president’s executive order targeting Muslim immigrants from the Middle East and heard about the protest at San Francisco International Airport, I knew how I was going to spend my Sunday. Somewhere hidden in that airport were unfortunate travelers in custody, separated from their families based solely on their ethnicity and country of origin. My friend Saret and I headed down early to help out the couple dozen committed souls who spent the night there after some of the thousands there the day before had headed home.

When Saret had to leave for work, I connected with a number of new friends who were good company throughout the day. 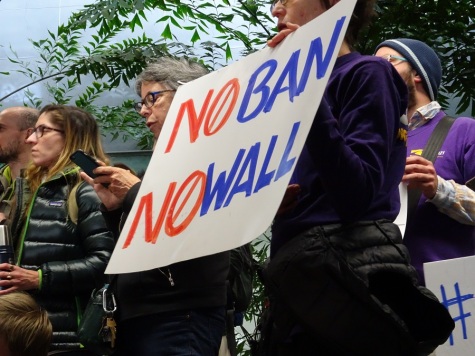 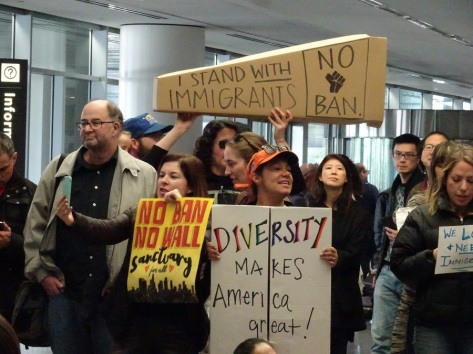 As people came and went they left their signs behind to be picked up by others.

Attorneys arrived and offered their services, forming a spontaneous team. Some set themselves up in a coffee shop as their legal headquarters. Others walked around prominently to direct people to the headquarters, and asked around to find people who could translate their signs into Farsi and Arabic for arriving travelers. At one attorney’s request, our crowd chanted our support: “Let the lawyers in, let the families out.” 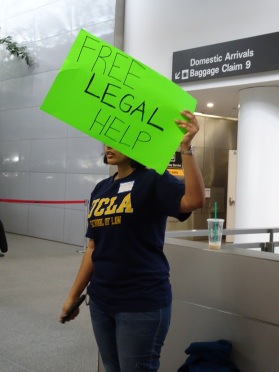 As the hours passed, more and more people arrived at the airport. We sang and chanted while some American travelers happened upon our protest and cheered for us.

Droves of supporters had started dropping off food the previous day for people staying overnight, and there continued to be lots of food available on tables along the sidewalk outside the terminal. 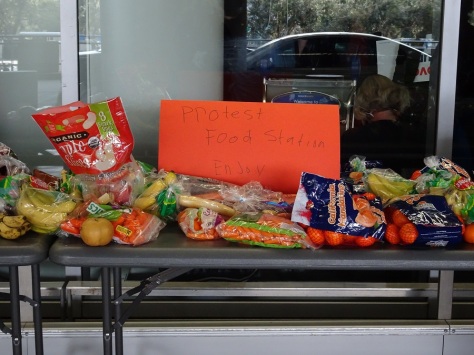 Sympathetic managers at San Francisco International Airport issued a formal statement of support: “We appreciate all those who have so passionately expressed their concerns over the President’s Executive Order relating to immigration. We share these concerns deeply, as our highest obligation is to the millions of people from around the world whom we serve. Although Customs and Border Protection services are strictly federal and operate outside the jurisdiction of all U.S. airports, including SFO, we have requested a full briefing from this agency to ensure our customers remain the top priority. We are also making supplies available to travelers affected by this Executive Order, as well as to the members of the public who have so bravely taken a stand against this action by speaking publicly in our facilities.”

Hundreds more people continued to stream in as I headed home. Eventually there would be 1,000. Later in the day the last person detained, a man from Iran, was finally released and united with his worried family.

This is indeed what democracy looks like. To get involved with a national movement with your local neighbors, I hope you’ll join me in connecting with Indivisible. Please spread the word.

9 thoughts on “This Is What Democracy Looks Like: Action at the Airport”