Mitchell encouraged me to camp at an area outside of Bishop called the Buttermilks, part of Inyo National Forest. It was a good place to settle in, not far from town so I could refill my water jugs and get ice for the cooler but far enough off the beaten path to have a quiet place to myself for stargazing and beautiful sunrises.

My little rental sedan did pretty well on the dirt road. I heard from the local Forest Service staff that I could drive close to a trailhead for Horton Lakes, but I think their info was outdated. I ended up turning around in about a 30-point turn since I didn’t have high clearance but found a spot I’d passed earlier where I was able to pull off the road into a nice place near the creek.

The Buttermilks are an interesting geologic formation popular with climbers. At about 5,500 feet, the area has big views across the valley to Sierra peaks like Mt. Humphreys whose summit is 13,986. With the fall bloom of yellow rabbitbrush and warm nights, it was a great place to base from for a few days.

For a couple days the temperature dropped a bit and I could see it was raining heavily at elevation. But where I was, the clouds just dropped the daytime temperature a bit, which was welcome because it was previously almost 90.

Here are a few photos from my campsite. In the second picture, that’s Mt. Humphreys on the right. 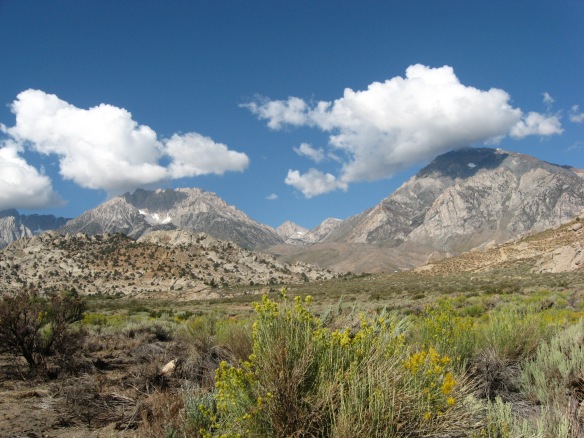 When I spend time outdoors, it fascinates me to watch how the same landscape changes significantly in different light. Here are a couple shots of the Buttermilks rock formations at sunrise. 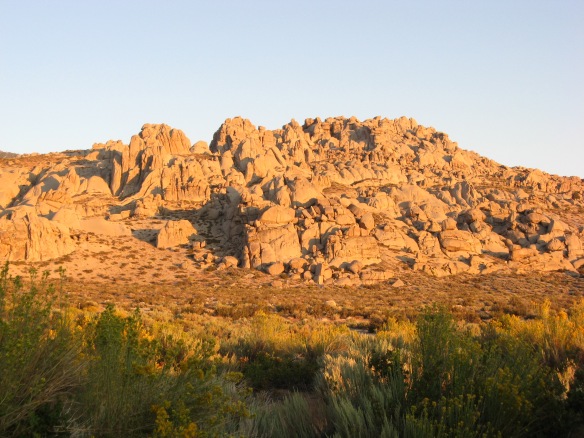 There’s always at least one thing that goes awry on every trip. Mine happened on my third day camping here. I drove into my campsite around dusk after a hike to find my tent upended, caught on the shrubs and up against the boulders about 30 feet from where I’d pitched it. Despite being fully staked and having my sleeping bag, pillow and a heavy pad inside, a big wind had come up and turned it into a sail.

The good news is that I’d picked the right place to camp with barriers that caught the tent instead of having to hunt all over the valley for it. I said a thank you to whomever designed it to be tough enough to withstand the scrapes from rocks, shrubs, and broken glass from previous campers where it ended up with all that weight in it.

The area where I camped had been burned recently, clearly caused by people. I had pitched my tent at the edge of the burn but when it blew away, it went straight into the burn area. With digging it out and my stuff inside, everything got sooty, from my gear to my skin. When I got to my friends’ place in Bishop to clean up after my camping trip, I hung the tent up on a clothesline to hose off and the water was dark gray.

(The tent for you gearhead types is the REI Quarter Dome T3, a real palace for me car camping solo and quite roomy for two people as long as you’re both under 6 feet tall. The fly also includes a nice venting feature to avoid condensation inside, which came in handy in the damp redwoods.)