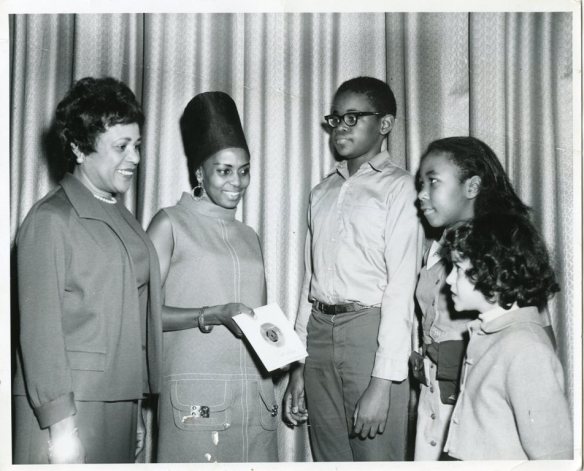 Greetings. I found your website through a search to track down Catherine Blackwell, my teacher in elementary school many years ago. Thank you for posting your wonderful biography of her. It’s fitting that Detroit Public Schools has named a school after her.

As you know, Mrs. Blackwell–after all these years it is hard for me to call her anything else–was a pioneer in bringing multicultural education into public schools. She had a profound influence on me as a child at Bagley Elementary, bringing alive the art and music of Africa and inspiring so many young people, including me, during the black pride movement. Her commitment to celebrating diversity was universally captivating. I think I was one of the only white kids in the choir but I absolutely felt the contagious joy that came from performing songs like Lift Every Voice and Sing, described to us then as the black national anthem.

I want to let you know that I have a couple keepsakes from a particularly special event when I was Mrs. Blackwell’s student in 1968. She arranged for exiled South African singer and anti-apartheid activist Miriam Makeba to come to Bagley. This was at the height of Makeba’s fame for her worldwide hit song Pata Pata. The school district arranged to take a photo that was published in the African American newspaper, the Detroit Chronicle (now the Michigan Chronicle), on January 6, 1968. I have both an original print of the photo and a clipping from the newspaper including the date of publication.

The photo features Mrs. Blackwell and Miriam Makeba smiling warmly at three fifth-graders working very hard to look comfortable for the camera but clearly nervous: my good friend Vicki, a boy named Paul whom I don’t recall, and me. In this image, Miriam Makeba is showing us a 45 single of her song.

Looking at this photo now, buried in a box at my mother’s house until recently, I recognize the major impact that Mrs. Blackwell had on my life. Through the powerful tool of celebrating what everyone contributes to the world, she inspired me to pursue what is my lifelong work for social justice. She brought music from Africa into my life, motivated me to sing, and nurtured the joy and curiosity of children from every background.

It has been nearly 44 years since the photo was published in the Detroit Chronicle. I have never thanked Mrs. Blackwell for opening my eyes to the cultural richness of the world and teaching me the importance of embracing diversity. I very much want to do so.

I sat at my keyboard and typed her name into Google, holding my breath fearing that what might come up was an obituary. Instead, I was delighted to find a 2009 YouTube video of her 90th birthday party. And I am relieved to see on your website that her year of death is listed as “n/a.”

I would like to thank Mrs. Blackwell for the incredible gift she gave to me and so many children. I would be very grateful if you could provide me with a way to write to her through you or another contact. And I would be happy to send you high-resolution digital copies of the photo and news clipping to add to your archives. It would be an honor to contribute to Mrs. Blackwell’s legacy.

With appreciation for all that you do,
Beverly

UPDATE:  I found her!  Check out the rest of the story and photos.

Here is a link to the Biography of Catherine C. Blackwell on the website of Wayne State University’s Detroit African-American History Project: http://www.daahp.wayne.edu/biographiesDisplay.php?id=56

Here’s Miriam Makeba singing Pata Pata in the 1960s. This was during the 30 years she was exiled from South Africa because of her civil rights activism, until she could return home with the end of apartheid. In 1966, she won a Grammy Award for Best Folk Recording.  http://www.youtube.com/watch?v=e-VrfadKbco

3 thoughts on “My Search for Mrs. Blackwell: A Letter”